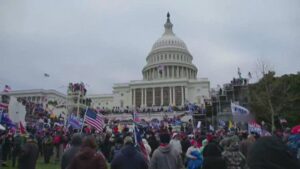 WASHINGTON, D.C. (NBC) – The Justice Department expects to file criminal charges against at least a hundred more people accused of taking part in the insurrection.

320 people already face criminal charges stemming from the January 6th attack on the Capitol. In court documents, the Department of Justice says it expects to file charges against at least a hundred more.

The DOJ stated, “The investigation and prosecution of the Capitol attack will likely be one of the largest in American history, both in terms of the number of defendants prosecuted and the nature and volume of the evidence.”

The DOJ is asking a federal judge for more time to investigate before having to proceed to trial for nine people accused of being followers or members of “The Oath Keepers” and joining in the attack. That delay would deviate from normal deadlines under the federal speedy trial act.

The court filing also states that more than 900 search warrants have been executed “in almost all fifty states” and Washington, D.C. and investigators have received more than 15,000 hours of surveillance and police body camera video, about 1,600 electronic devices and over 210,000 tips.