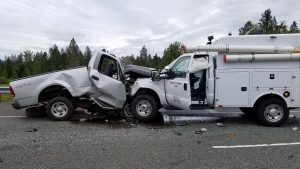 JOSEPHINE COUNTY, Ore. – Police are releasing more details about a crash on the outskirts of Grants Pass that left one person dead.

Oregon State Police said just before 8:50 a.m. on May 30, a silver 2004 Ford F150 pickup truck driven by 46-year-old Francis Coulter of Cave Junction was traveling on Highway 199 just outside of Grants Pass. For unknown reasons, Coulter’s vehicle veered into the opposite lanes and crashed head-on with a Pacific Power utility truck near milepost 5.

Coulter was pronounced dead at the scene.

The driver of the Pacific Power truck, identified by police as 43-year-old Jeffry Kramer of Grants Pass, was taken to a local hospital with serious injuries.