MOUNT SHASTA, Calif. — Mt. Shasta police got a new tool for their department on Thursday in hopes it’ll take a bite out of crime.

The new K9, Artie, is the first canine the department’s had in 19 years.

It was made possible by a generous donation by the Arthur R. Dubs Foundation in Medford this summer. 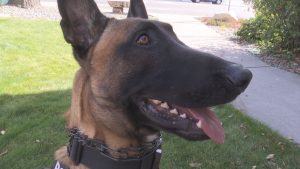 “As soon as they brought him in there he was just so sociable it kind of instantly got our attention,” said Officer Walter Moore, Mount Shasta Police Dept. “I believe it was that day actually we called them and said yes, this is the dog we want.”

Officer Moore, a self-described dog lover, says he’s dreamed of having a four-legged partner since joining the department in 2017.

“I used to run dogs for hound hunting to hunt bears and I’ve just kind of always been around dogs,” he said.

His new puppy grew up in the care of Northern California company, H & S Controlled K9, which trains K9’s for law enforcement agencies.

“We’ve put 10 months of work into him, take him out for a lot of socialization with people… introduce him to a lot of different environments [like] slick floors, dark rooms, loud noises, anything he might come across in his workday,” said Rich Hartman, owner of H&S Controlled K9.

He says he knows all too well the difficult balance between loving and caring for your K9 while still knowing the dog has a dangerous and important job to do.

“We realize the benefit the K9 provides for a department like this,” he said. “Where manpower is low and the dog can come out and be a force multiplier for the department.”

Still, what Hartman says never gets easier is the bittersweet day he gives away his dogs.

“He’s lived with our families and we put thousands of hours into working and making him the police dog that he is and the pet that he is,” he said.

But knowing Artie’s found a new, loving home and handler makes all the difference.

“He’s also going to be my best friend that I live with and grow up with and see him go through all the stages of his life,” said Officer Moore.

Although his original name was “Luke,” the Mount Shasta Police Dept. has since changed his name to “Artie” in honor of the foundation.