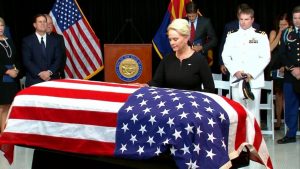 PHOENIX, Ariz. (NBC News) A solemn honor guard escorted the body of John McCain into the Arizona State Capitol rotunda Wednesday, where he will lie in state on what would have been his 82nd birthday.

“John McCain was a fighter and he called on us to fight with him. For American values, for the ideals and character of a free people. While we grieve today as a state and as a nation, John McCain’s fight for America isn’t over,” said Arizona Governor Doug Ducey.

In a small, private ceremony, McCain’s family gathered with friends and colleagues inside the capitol.

Following the ceremony, his wife Cindy paused briefly, resting her cheek on his coffin, followed by all seven of his children.

Thousands of people from his adopted state were drawn to the Capitol even in the blistering heat, with lines stretching around the building as they gathered to say goodbye to Senator McCain.

Memorials and tributes will continue through the weekend as the nation salutes a war hero and honors a political maverick.

Senator McCain will make his last trip to Washington after a memorial in Phoenix Thursday. He will lie in state in the U.S. Capitol Rotunda Friday, followed by a funeral at the National Cathedral. He will be buried Sunday at the U.S. Naval Academy Cemetery.