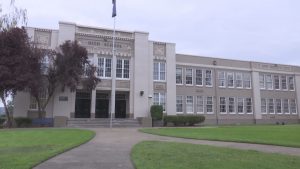 As we told you months ago, it’s coming to a historic site – 815 South Oakdale Avenue. The location has hosted Medford students for almost 100 years.

This afternoon the district hosted a groundbreaking ceremony to commemorate the start of renovations, the most significant and expensive of which includes seismic structural upgrades. Throughout the past nine decades, the site has been home to Medford High Schools and the district’s administrative offices.

When it opens in August of 2023, the 3 middle schools will free up space at elementary schools, by welcoming in sixth graders into the middle school program.

“One more step in us trying to fully utilize our spaces for students. It truly has district wide impact: it will be able to free up spaces in almost every elementary, put the sixth graders into the middle school programs, and then have a third middle school,” Project Manager Ron Havniear explained.

The project will be funded without any additional taxes to our community, something the district credits to careful money management and the blending of local, state, and federal funds.