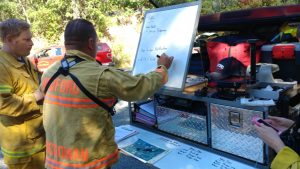 It’s part of an annual training exercise to best prepare agencies for responding to large-scale emergencies like a natural disaster, or a wildland fire.

“All the different things that help us do this job the best we can,” division chief, Austin Prince of Rural Metro Fire says, “it puts us through each motion in a controlled environment so that we can not be guessing when the real incident occurs.”

Everything is simulated so while the response is real, there’s no smoke or fire. The agencies also coordinate with local homeowners to practice evacuating. The drill will continue through Wednesday, June 28th.