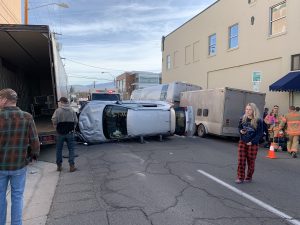 MEDFORD, Ore.– A multi-vehicle collision tossed a car onto its side Saturday morning at the intersection of E 8th Street and S Central Ave in downtown Medford.

Witnesses NBC5 News spoke with describe hearing the initial crash and then seeing a rollover on E 8th Street for several feet. The car managed to come to a stop between two large trucks on the road, blocking access for nearly an hour.

Those who saw the accident managed to steady the vehicle and help those who were inside. One witness said it was a mother and her two children.

“We’re just so thankful that they appear to be OK and that nobody was hurt in that vehicle or the other vehicle as far as we could tell,” said Jay Owenhouse. “I know they all went to the hospital to get checked. We’re just glad there are no visible injuries.”

Known as The Authentic Illusionist, Owenhouse, who is in Medford to perform his touring magic show Dare To Believe, said they were thankful as well that the car didn’t strike the trailer carrying their white tiger, a key member of the performance.

Medford Fire-Rescue posted on Facebook they were happy to report no one was injured in the crash. The agency also stated, “And for those wondering about the truck, no tigers were harmed in this incident.”