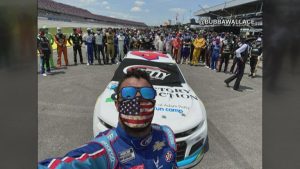 LINCOLN, Ala. (CNN) – The NASCAR organization is vowing to punish the person who left a noose in Bubba Wallace’s garage stall.

The racist symbol was found Sunday but sources say Wallace never saw it himself.

Bubba Wallace is the only black driver in NASCAR’s top circuit.

He has been an outspoken supporter of the Black Lives Matter movement.

Wallace recently made headlines when he called for NASCAR to ban the Confederate flag, which it did less than two weeks ago.

NASCAR President Steve Phelps said he will ban whoever left the noose. “Unequivocally, they will be banned from this sport for life,” he said. “There is no room for this at all and we won’t tolerate it, and they won’t be here. I don’t care who they are, they will not be here.”

The noose was found the same day a race was scheduled at Talladega Motor Speedway in Alabama.

It was delayed until Monday due to rain.

An airplane pulling a Confederate flag banner and a message reading “defund NASCAR” flew over the race track Sunday.

Confederate memorabilia is also being sold across the street from the venue.