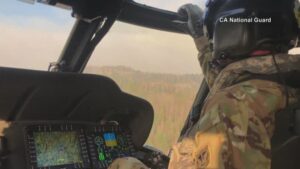 (NBC) California firefighters are getting help from Wisconsin.

The Wisconsin National Guard sent two teams of Blackhawk helicopters to help with the worst fire season California has ever had.

The teams have been flying over the so-called Creek Fire and SQF Complex in central California.

Teams have been busy scooping up water from 660-gallon buckets and dumping water on the fire.

Four pilots, four crew chiefs and about six maintenance crews have worked together to dump some 52,000 gallons of water on the fires in less than two weeks.