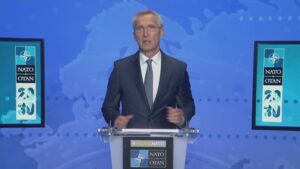 NATO Secretary-General Jens Stoltenberg Tuesday blamed the swift collapse of Afghanistan on the “failure” of the country’s leadership.

The Taliban declared an amnesty across Afghanistan following a blitz across the nation that saw many cities fall to the insurgents without a fight.

“But what we have seen in the last few weeks was a military and political collapse at the speed which had not been anticipated,” he said. “Parts of the Afghan security forces fought bravely. But they were unable to secure the country because ultimately, the Afghan political leadership failed to stand up to the Taliban and to achieve the peaceful solution that Afghans desperately wanted.”

Stoltenberg said the Afghan political leadership failed to stand up, adding “this failure of Afghan leadership led to the tragedy we are witnessing today.”

He added, “At the same time we need to have an honest, clear eyed assessment of NATO’s own engagement in Afghanistan. Despite our considerable investment and sacrifice over two decades, the collapse was swift and sudden. There are many lessons to be learned.”