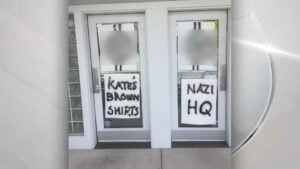 MEDFORD, Ore. – Someone drew Nazi symbols at Medford’s Occupational Safety and Health office during a protest over the weekend. They even labeled the office “NAZI HQ.”

An OSHA spokesperson said it was painted on cardboard and taped on the door during the protest.

He said no actual physical damage occurred to any part of OSHA’s office building.