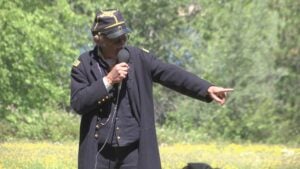 The event was hosted by the Cascade Civil War Society.

The president of the war society, Hugh Simpson, says the group hosts a reenactment every year at the park.

He says people drove up from northern California to participate.

“You can feel as much as a person can, without being in a real battle, and the horrors of war, what a lot of soldiers must’ve felt. Sitting in the line, listening to the commands,” said Simpson.

Simpson hopes people understand the history of the war and can participate next year if they missed today’s event.

If you’re interested, more information about the civil war reenactments can be found at cascadecws.com.