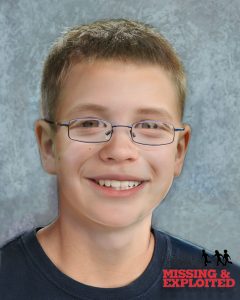 Age progressed image courtesy of the National Center for Missing and Exploited Children.

Portland, Ore. – Nearly seven years after Kryon Horman disappeared, the National Center for Missing and Exploited Children has produced a new age-progressed image of what Kyron may look like today.

Kyron was last seen by his stepmother Terri Horman at Skyline Elementary School in Portland back on June 4th, 2010.

Kyron’s biological mother, Desiree Young, believes Terri Horman had something to do with her stepson’s disappearance.

Horman has long been a person of interest in the disappearance, but she has never been charged.

Today, Kyron would be 14-years-old.

He was last seen wearing a black t-shirt with “CSI” printed on it, black cargo pants, white socks, black sneakers and glasses.