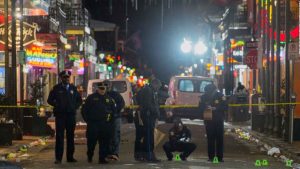 An argument between two men on Bourbon Street escalated into a shootout, police Chief Michael Harrison said at a news conference Sunday. Authorities are searching for the two men, who are believed to be from outside of New Orleans.

“We believe they ran into each other in the street, and an argument ensued at that time, that stemmed from an argument that they had already from another place,” Harrison said.

Two women and eight men between the ages of 20 and 37 were shot, the chief said. Five have been released from hospitals and the four who remain hospitalized are expected to make a full recovery, Harrison said.

“We don’t believe any of those shot were the intended targets,” Harrison said.

The deceased was identified as 25-year-old Demontris Toliver of Lafayette, Louisiana, a man with a “promising life,” Mayor Mitch Landrieu said Sunday.

The shooting took place during Bayou Classic Weekend, four days of festivities that include a Thanksgiving parade, a Saturday college football game between Grambling State and Southern University and a Saints game on Sunday.

The popular tourist area was more crowded than usual when the shooting happened because the college game had ended some six hours earlier in the nearby Superdome.

“Until the middle of last night it was a glorious vacation and wonderful holiday by all measures,” Landrieu said. “This is not the New Orleans way.”

Police received a call just before 1:30 a.m. reporting shots at the intersection of Bourbon and Iberville streets, near the western edge of the French Quarter.

About 40 police stationed in the neighborhood for Bayou Classic special events responded to the call on foot and horseback, Harrison said.

The shooting appears to have stemmed from an argument between the two men that started elsewhere, Harrison said without elaborating. When they encountered each other again on Bourbon Street the dispute turned into a shootout, after which the suspects fled the scene.

“This is an active, fast-moving investigation,” he said. “We will pursue every lead.”

“Everything we could do we did,” he said. “Those people made a choice to endanger lives.”