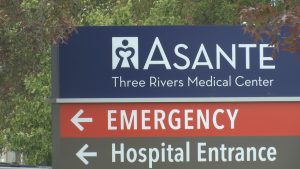 GRANTS PASS, Ore. — There will be no charges filed against the man responsible for the second lockdown in a month at Asante Three Rivers Hospital. Asante said it happened around 8:30 Tuesday morning, when a man called the hospital three times threatening to harm a patient.

Sheriff Dave Daniel says the threats happened after a domestic dispute. He says the woman packed her belongings, including her boyfriends phone, and left. She was then in a car crash, which led her to getting checked out at the hospital.

“While she was at the hospital, the boyfriend calls her and says ‘hey give me my phone back or I’m going to kill you.’ She then relayed that to hospital staff . Hospital staff says we cant have that we’re just going to go on lockdown,” said Sheriff Daniel.

During the lockdown, no one was allowed to enter, other than those seeking emergency care. People walking around the emergency room were asked to keep the area clear and some people with appointments were forced to reschedule.