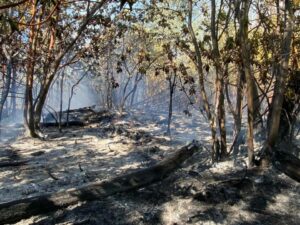 GOLD HILL, Ore. – The North River Road Fire, burning between Gold Hill and Rogue River is 100 percent lined as of June 20. The Oregon Department of Forestry said the fire is five percent contained, but crews would work throughout the day to further mop-up efforts while holding the lines.

Through the night, firefighters determined the fire was 60 acres.

According to ODF, the majority of the fire is burning on Bureau of Land Management lands, including the Mountain of the Rogue biking trails; they are currently closed to the public for safety concerns and wildfire operations along the trails.

A type two and type three helicopter are assigned to the fire today and will be doing bucket drops on particularly difficult areas.

Jackson County Emergency Management and the Jackson County Sheriff’s Office issued a level 1 (BE READY) evacuation notice for the 1000-3000 blocks of Wards Creek Road in Rogue River and the surrounding area of the North River Road Fire. That evacuation notice remains in effect. North River Road is now open, however, the public is advised to used alternate routes if possible for the safety of firefighters working in the area.

The cause is currently under investigation; as there were no reports of lightning, it has been determined to be human-caused.