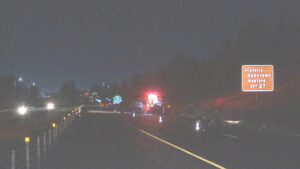 MEDFORD, Ore. – Interstate 5 northbound between Phoenix and the south Medford exit was shut down overnight after two cars plowed into an ambulance that was pulled over for a separate crash.

Oregon State Police said the ambulance was responding to a rollover crash on the northbound side of the freeway near milepost 27 at about 11:00 p.m. Sunday.

OSP said shortly after, two cars traveling at the normal highway speed crashed into the ambulance, sending multiple people to the hospital.

I-5 northbound was shut down during the extended crash investigation.

At least four people were injured, including two paramedics and an Ashland firefighter.

After being shut down for hours, I-5 northbound between Phoenix and Medford was back open at about 6:30 a.m. Monday.

“What could have been a tragedy was miraculously avoided last night. I want to make sure everyone out there knows how important it is to slow down for emergency workers on roadways, particularly at night,” said Ashland Fire Chief Ralph Sartain.