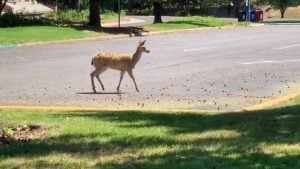 CENTRAL POINT, Ore. – Local wildlife officials are warning the public about aggressive deer after a dog was killed by a doe in Medford.

The Oregon Department of Fish and Wildlife said there’s an increasing number of aggressive deer throughout Ashland, Medford and Jacksonville. ODFW explained this is the time of year when deer are raising their fawns, and they will protect them from dogs or other perceived threats.

In one incident in an east Medford home’s yard, a dog was killed by a doe. In another incident, and Ashland woman was attacked while she was walking her dog on the Southern Oregon University campus.

“People in Ashland tolerate deer eating their landscaping because they love having them around, until they start to get aggressive like they are now,” said Matthew Vargas, assistant district wildlife biologist. “The best way to keep them away is to not feed them. You can also spray a garden hose at them if they are in your yard—any kind of hazing that doesn’t actually harm them.”