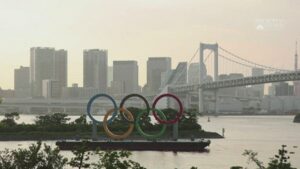 TOKYO, Japan (NBC) – A coronavirus state of emergency has come into effect in Japan’s capital as new cases rise and athletes begin to arrive with just eleven days to go until the start of the Tokyo Olympics.

Tokyo is now under a state of emergency and Olympians feeling it the moment they land, from long waits and COVID testing at the airport to apps that track their every move. Travel is limited to the Olympic village and event locations. No trips to outside restaurants or tourists sites are allowed.

But with all the restrictions in place, Olympic athletes are not required to be vaccinated.

U.S. swimmer Michael Andrew said, “I didn’t want to put anything in my body that i didn’t know how i would potentially react to, you know, as an athlete on the elite level.”

Team USA’s Michael Andrew is competing in three events, saying he’s not vaccinated and doesn’t plan on it in the near future. “All of us here have been through a very strict protocol,” Andrew said.

There was some hope that some of the venues outside of Tokyo may have spectators but we’ve just learned officials in Fukushima and Sapporo, there was going to be baseball events in those cities, they have just said they are not going to have spectators as well. So this means this sort of ban on spectators is spreading throughout Japan.