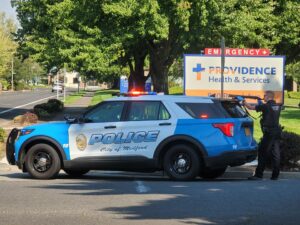 MEDFORD, Ore. — Saturday morning around 11:30 a.m. Medford Police officers responded to an assault in an apartment in the 800 block of Royal Avenue. Police believed the suspect was possibly armed with a firearm.

Officers arrived and found a male suspect outside the apartment. The suspect ran back inside to avoid contact with officers. After officers phoned the suspect, he exited and was detained with out further incident.

Officers located a deceased male inside the apartment, who appears to have suffered homicidal violence. The scene was turned over to Medford Police detectives who are being assisted by the Oregon State Police Crime Lab.

Police say more information will be released as the investigation unfolds.