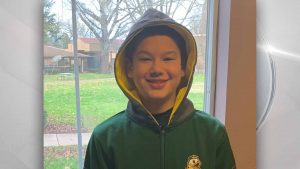 Update (06-19-20 9:11 a.m.) – Missing foster child Nakhai Roberts was found in the early morning hours of Friday, June 19, according to the Oregon Department of Human Services. No further information was provided.

Original story: CORVALLIS, Ore. – State authorities are asking the public to be on the lookout for a missing foster child.

The Oregon Department of Human Services said 12-year-old Nakhai Roberts ran away from a children’s care facility in Corvallis on June 7. He was accompanied by a 16-year-old boy who was also from the facility. They were reportedly seen headed eastbound toward Albany.

On June 13, the 16-year-old was found in Eugene and taken into custody. Roberts, however, remains missing. DHS believes he could be in danger.

There is reportedly reason to believe Roberts may still be in the Eugene-Springfield area.

Anyone with information about Roberts’ location is asked to call 9-1-1 or local law enforcement.