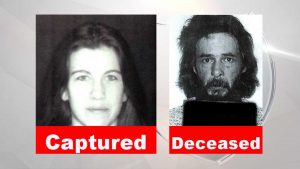 CHATHAM, Miss. – Two fugitives from Oregon wanted since 2000 were found after they went to a Mississippi hospital.

The Federal Bureau of Investigation said Victoria Michelle Cravitz and Leon Henry Shaw—both common-law partners—allegedly sexually molested several children between the ages of 6 and 17 in Klamath Falls, Oregon from 1989 until 1999.

In 2000, arrest warrants were issued for the couple on numerous charges. Shaw and Cravitz reportedly fled the area to avoid prosecution.

On July 25, 2018, the FBI announced Cravitz was living under the name “Jennifer Larsen” when she took Shaw to a hospital to receive medical care. Shaw died of natural causes at the hospital. While generating a death certificate, questions arose as to the true identity of Shaw. That’s when the FBI was contacted.

Cravitz was subsequently arrested is now awaiting her initial appearance in a Mississippi courtroom before being extradited back to Oregon for prosecution.

Klamath County District Attorney Eve Costello said “Our County intends to prosecute Ms. Cravitz to the full extent of the law. Her and her husband’s abuse of multiple children have created long-term negative ramifications for many individuals. The allegations involve the kidnap, rape and torture of a number of young girls since before 2000 when the case first came to light to DHS. DHS was able to intervene, but Ms. Cravitz and Mr. Shaw took off out of county. We are glad to see their whereabouts determined and plan to seek justice for the victims.”