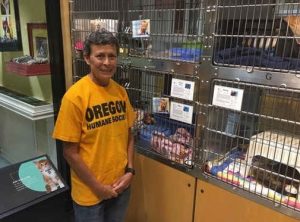 PORTLAND, Or.- The Oregon Humane Society is sending teams to help with stranded, displaced, and/or abandoned pets that have been effected due to Hurricane Harvey.

“Natural disasters of this scale can leave thousands of animals without homes and will easily overwhelm the ability of local shelters to care for pets,” said Sharon Harmon, OHS President and CEO.

The society will be sending a team of four people – two Oregon Humane Society staff members and two volunteers.

“You have to kind of compartmentalize, because if I’m thinking about the horrible situation people are in, I don’t want to transmit that to the animals,” Sherry Adams, one of the volunteers said.

The team will help care for animals at a shelter in the Houston-area and work hand-in-hand with the Houston SPCA.

“I want them to be calm and feel good, so I have to be that way when I deal with the animals. But I imagine it will be tough, especially in the evenings, at least more me,” Adams said.

In Houston, many shelters are moving current strays to other shelters across the country. Wings of Rescue, a nonprofit, is expected to fly about 40 stray animals from Texas to the Oregon Humane Society, possibly as soon as Wednesday night.

According to OHS spokesperson, David Lytle, those animals will then be up for adoption here in Oregon soon after, from a couple days to a week, depending on their situation.