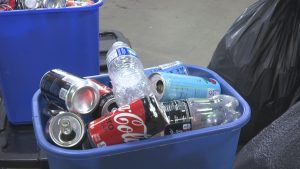 Medford, Ore.– An Oregon bottle law will be expanding to include more types of bottles and cans come the new year. That means for many that trade in their empty recyclables for cash, it could be much more lucrative in January.

For homeless man Kevin Maple, the law is a way forward and the invitation to a fresh start. As a recovering heroin addict who has struggled to keep himself afloat, finding bottles and cans are a source of income and a way of life.

“If I saw cans on the side of someone’s house, you’d be amazed how many people would just give it to you. You just go up there and knock and ask them ‘look I need to make a few bucks’ or ‘this is how I support myself.'”

The new law which will open up previously exempt categories such as coffee and tea bottles will hopefully get more people to recycle items that they can trade for cash. There are still exempt items like wine, milk and infant formula but with such a larger category of recyclables, BottleDrop employee LJ Washington sees this as a chance to not only help the planet but some of the people on it.

“You know the average Joe, if they don’t have a job, this is an income for them. Thirty-five dollars a day, 350 cans, you know that’s a good thing for them,” said Washington.

For people like Kevin, who rides a bike around Medford making multiple trips per day, this new law is an exciting opportunity. Already he says he makes about $60 a day, collecting 6,000 cans and bottles in order to scrape by. But he’s not the only one, Kevin says a lot of people do this instead of breaking the law to make money.

“I know a lot of people that are in my same situation, my same boat that use this as an escape route from the criminality.”

Kevin understands that not everyone is accepting of what he does to survive especially if they have dealt with the bad kind of people that steal and destroy. Still, he says it’s his only way right now.

“Some people are concerned man. They come out and say ‘stay out of my garbage dude.’ Then it’s sad you watch a whole red recycle bin with almost ten, fifteen bucks in it, you could have a great meal on, go right into the landfill.”

He struggles to make ends meet but believes that while he is searching for cans and bottles in recycling containers, he shouldn’t be disrespectful to the property owner.

Unfortunately Kevin says he still falls victim to his addiction and some of his hard earned money pays for it. But with the help of recycling, he says he is slowly getting his life back.

“Now if I do get to that point or I am at the urge, like I said I am recovering so its constantly there, I know I can go out walk around find some cans.”