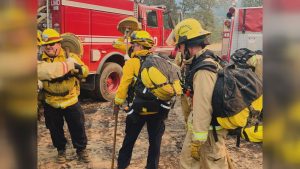 SONOMA, Calif. — Firefighters from across the Rogue Valley are fighting fires in Northern California.

According to the State Fire Marshal, 271 firefighters from across Oregon including Jackson, Josephine, Klamath, and Douglas Counties are in California.

The strike teams arrived on Sunday and are battling fires in Mendocino and Sonoma counties.

The fire in Sonoma County is currently burning over 66,000 acres and forced the evacuation of 180,000 people.

“We’ll do everything we can within our power and within reason of what the fire’s doing to keep them protected and give them an opportunity to get back to their homes,” said Tom McGowan, a firefighter with Medford Fire-Rescue.

McGowan says he and his team were on the front lines on Monday re-enforcing dozer and hand lines and protecting structures.