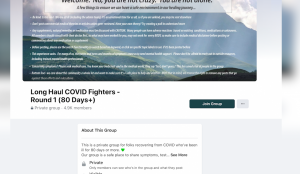 MEDFORD, Ore. — “We felt like our bodies couldn’t fight anymore and I think because we, in spirit, we had our collective spirit… we were able to keep fighting,” said Chelsea Alionar, Covid-19 survivor.

There’s an age old saying, sometimes it’s easier to talk with a stranger than it is a friend.

Alionar, who is a medical auditor in Keizer, remembers the day she tested positive for Covid-19 in early April.

A moment, she says, that changed her life both physically and emotionally.

“Seeing all the news coverage of what Covid entails set me into a tailspin and I immediately started to flip out because all we were seeing was the death toll, the death toll and isolation, so I had several moments of panic,” said Alionar.

Alionar was desperate for others who understood what she was going through.

Her saving grace, as she calls it, was a Facebook group called ‘Long Haul Covid Fighters’ created by Portland preschool teacher Amy Watson.

“It’s the best thing to come out of this illness honestly for me is to find a way to support and help others,” said Amy Watson, Covid-19 survivor. “Because this is just such a helpless situation for all of us and for those of us that are Covid positive, it’s been literally isolating not just from the outside world but even for many people within their own families and households.”

From sharing their inner most fears, accomplishments and more, Watson says the group’s become like a second family.

And the outpour of love and support from members, she says, has been overwhelming.

“Thank you so much for creating this group, I thought I was crazy, even my own family doesn’t believe me… the solidarity that we feel in our group is remarkable,” she said.

Today, Watson has a temperature of around 100 degrees every day and Alionar can no longer hear out of her left ear.

Their fight against the virus continues, but at least they’re not in it alone.

If you’re interested in joining the group, there are rules.