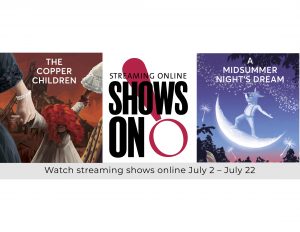 ASHLAND, Ore.– The Oregon Shakespeare Festival may be closed this season but that won’t stop the Ashland company from bringing performances to your home.

Like many seasonal businesses, the shutdown from COVID-19 this summer has caused a financial headache. OSF is no exception as its entire 2020 season was canceled in May.

However, the festival is looking to make up for some of the losses by bringing performances to viewers in their homes. “O!” the festival’s new online streaming service is releasing full-length video recordings of two of it’s most popular plays this year.

On July 2, OSF will be launching a new segment of its streaming service called “Shows on O!” for viewers to catch on computers and mobile phones. The effort is a way to branch out to new audiences while also helping to make up for lost revenue from a season cut short.

“We will continue to offer programming in support of keeping our operations going, supporting our artists, and moving towards the future,” said CJ Martinez, spokesperson for the festival.

Money made through these plays will go to help pay for operations this summer as well as giving a cut to actors that appeared in the two plays.

The two plays, which were the most popular plays while the 2020 season was available, are The Copper Children and A Midsummer Night’s Dream.

The plays will be offered at $15 for a 48-hour window – a lower cost than it normally would be to attend in person.

“In terms of access and price point that’s really one of the main priorities of O! and Shows on O!” said Martinez.

The plays were filmed during the start of the season as part of OSF’s dress rehearsal process. They originally were not intended for public viewing.

But the pandemic has changed things and the festival is now going through its archives to see what other plays could be available for release in the future.

“This represents in 2020 a move from OSF’s exclusivity of being only live performance previously to now being live in the future and available and accessible online wherever you are,” said Martinex.

The festival is still in the process of deciding what plays could get released in August.