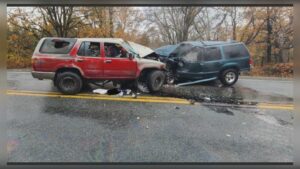 The Jackson County Sheriff’s Office says the incident involved two separate car crashes on Table Rock Road. The first happened around 7:30 P.M. The agency says a driver was pulling out onto the main roadway when they pulled in front of another car.  The two collided.

While deputies were responding to that crash, a drunk driver crashed into a deputy’s car 15 minutes later.

The officer and the driver were both taken to the hospital with non-life-threatening injuries.

The driver was arrested and charged with DUII.

The Sheriff’s Office says OSP is investigating the crash because it involves one of their own.