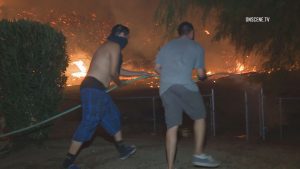 RIVERSIDE COUNTY, Calif. – A massive California wildfire has forced the evacuation of thousands of homes in Orange and Riverside Counties.

The Holy Fire, allegedly set by an arsonist, has grown to over 18,000 acres and forced the evacuation of more than 7,400 homes, totaling an estimated 21,400 people. So far, it has destroyed about a dozen structures.

California Governor Jerry Brown declared a state of emergency for the two counties affected by the fire.

The fire started Monday afternoon and has continued to grow, blackening thousands of acres of the Cleveland National Forest.

NBC Los Angeles reports the fire is fueled by thick brush that hasn’t seen flames in decades with flare-ups and embers keeping firefighters on their toes.

With low humidity and high temperatures in the region forecasted to be over 100 degrees, extreme fire behavior is expected to continue.