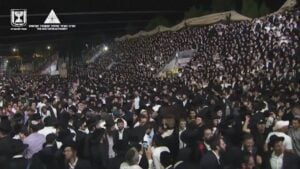 MOUNT MERON, Israel (NBC) – A stampede at a religious festival attended by tens of thousands of ultra-orthodox Jews in northern Israel killed at least 45 people and injured about 150. It’s one of the country’s deadliest civilian disasters.

Tens of thousands of people Thursday night went up to a mountain in northern Israel to mark the Jewish holiday of Lag BaOmer.

Coming down the mountain, they pass through a narrow, metal walkway which at one point went around a sharp corner and down a flight of stairs. And it looks like at that corner there was confusion, there was overcrowding and people were trampled underfoot.

Velvel Brevda is a rabbi who witnessed the stampede. He said, “We’re all heartbroken today. Instead of being happy and rejoicing on this great day of Lag BaOmer right here in Meron, people are walking around with their nose down instead of being in high spirits and happy.”

This was the biggest public event in Israel since the start of the COVID pandemic and the Israeli health ministry had even actually warned earlier in the week that people should stay away because of the risk of COVID spreading.

It turned out to be a different kind of tragedy but the warnings were there over the size of the crowds we were going to see at the event.

Israeli police say they are investigating and if there is any sign of criminal negligence they will hold people accountable.