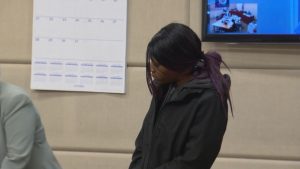 PORTLAND, Ore. (KGW) – A Portland, Oregon woman has been charged after authorities say her gun went off inside an elementary school cafeteria.

27-year-old Antoinette Riley has been charged with one count of possession of a firearm in a public building.

Investigators say her gun discharged when she went to pick up her child from Jason Lee Elementary School Thursday.

No one was hurt, but police found a hole in a cafeteria bench and table.

Investigators do not believe the gun was fired with the intent to injure.