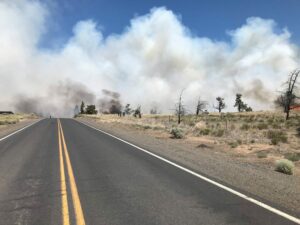 REDMOND, Ore. – Evacuations are underway after a brushfire started in the Central Oregon city of Redmond.

KTVZ reports the fast-moving Antler Fire started Tuesday afternoon on the outskirts of the east side of town.

Soon, there was a second fire spotted north of the Redmond Air Center where firefighters and firefighting aircraft are based.

That second fire was estimated to be about 200 acres by late afternoon as winds contributed to numerous spot fires in the area.

Eventually, the airport was closed to the public and Central Oregon Community College’s Redmond campus was evacuated as a precaution.

An interactive map of the evacuations zones is available HERE.

The cause of the fire has not yet been determined.