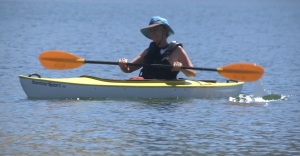 MEDFORD, Ore. — Many people are beating the heat this summer by escaping to lakes and rivers.

But before you grab that paddle board or kayak, you’ll need a permit.

You can buy it online through ODFW’s website or at an ODFW office that sells licenses.

The Jackson County Sheriff’s Office says they’re still warning people about the permit, but will eventually have to start enforcing it.