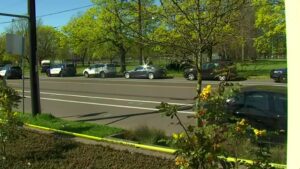 PORTLAND, Ore. – One person died after an officer-involved shooting in Portland Friday morning.

The Portland Police Bureau said a preliminary investigation shows at about 9:30 a.m. on April 16, 2021, East Precinct officers were dispatched to Lents Park after they received a report of a white male with a gun.

When the police arrived, they found a male subject and confronted him. PPB said, “At some point during the interaction, both less lethal and lethal force were deployed by officers.”

According to police, officers provided emergency medical attention, but the person they encountered was dead.

No officers were injured in the incident.

During a news conference, PPB said their efforts to investigate the shooting were being “hampered” by a crowd of “fairly aggressive people” who showed up at the scene.

Police are still working on piecing together details about the incident and will release more details at a later time.