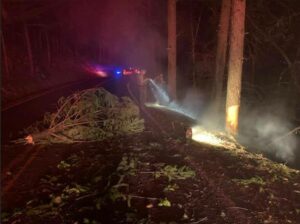 Investigators said just after 12:00 a.m. on May 5, first responders were dispatched to a vehicle fire in the 300 block of Limpy Creek Road.

When emergency personnel arrived at the location, they found an SUV that crashed into a tree and was on fire.

One dead occupant was found in the driver’s seat. However, that person has not yet been positively identified.

Firefighters said it appeared the vehicle left the road at a high rate of speed before hitting trees and erupting into flames. It also seemed like the fire had been burning for some time, Rural Metro Fire said.