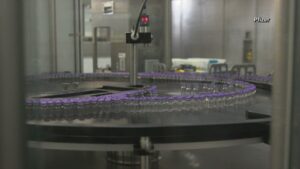 NEW YORK CITY (NBC) – Pfizer-BioNTech submitted data to the Food and Drug Administration Tuesday to get its COVID-19 vaccine approved for use in kids ages 5 to 11.

The FDA is expected to take several weeks to analyze data collected in a Phase 3 trial that included more than 2,000 children before it would grant emergency use authorization.

According to Pfizer, in this trial, kids were given two smaller doses of the vaccine than those given to those 12 and older. The smaller doses produced antibody responses similar to those seen in a study of people 16 to 25 who received full doses. The company said the vaccine also caused similar side effects to those seen in adults, which have included arm soreness and fatigue.

Pfizer officials said that a formal submission to request emergency use authorization of the companies’ vaccine is expected to follow in the coming weeks.

Pfizer said its two-dose COVID vaccine has shown to be safe while prompting a “well-tolerated” and “robust” antibody response among the younger kids.

In the U.S., Pfizer vaccine has been available for kids 12 and older since May. But millions of elementary school-age children are still vulnerable to the virus spread, as Delta variant continues to spread throughout the country.