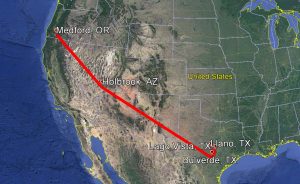 Llano, Texas – A pilot flying out of Medford, Oregon was busted with hundreds of pounds of marijuana in Texas.

According to the U.S. Department of Justice, Homeland Security’s Air and Marine Operation Center began tracking the small plane Sunday night after they noticed a suspicious flight pattern.

When the pilot, identified as Wayne Douglas Brunet, tried to land at an unstaffed airport in Bulverde, Texas, but he was met by law enforcement. He took off after seeing authorities on the ground.

Authorities said he tried to run away from the plane as he threw a large duffel bag and a cell phone into the grass, but he was caught on the tarmac.

Inside the single-engine plane, police found 15 duffel bags filled with packages of marijuana along with $6,000 in cash.