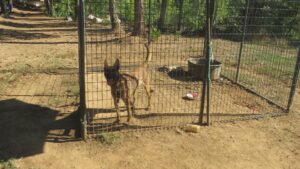 JOSEPHINE COUNTY, Ore. —Law enforcement in Josephine County is looking to charge the owners of a Grants Pass business, after finding sick animals there. Police say the suspect did not appear for his court arraignment.

Deputies and animal control found the dogs all at different levels of malnourishment, some requiring immediate care from veterinarians.  Last week, the Josephine County Sheriff’s Office executed a search warrant at the owner’s home in Selma.

JCSO found a deceased horse and rabbit and said 16 animals in total were found, including dogs, cats, and chickens. Sheriff Dave Daniel confirmed the identity of one of the business owners as Joe LaRue.  He says now it’s just a matter of locating him.

All the animals have been taken to the animal shelter.  The sheriff’s office is actively searching for LaRue.

Sheriff Daniel believes the suspects fled the area, possibly to another state.

The sheriff’s office is asking anyone with information regarding the suspects, to contact them.