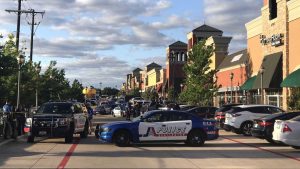 Arlington, Texas – Texas police are crediting what they call a “good Samaritan” with stopping a potential active shooter situation.

He then proceeded to shoot and kill a restaurant manager who tried to calm him down, identified as 37-year-old Cesar Perez. According to police, it did not appear the two men knew each other

Police said witnesses were afraid they’d be next.

Jones had two knives and a second gun with the serial number scratched off.

“He definitely had the capacity, if he wanted, to commit further violence and potentially kill other patrons in the business,” Arlington Police Lieutenant Chris Cook told NBC News.

Arlington police said a “good Samaritan” who was dining at the restaurant at the time of the shooting pulled out his own gun and shot Jones in the back.

“We’re thankful that the good Samaritan acted quickly and decisively to end the threat,” Lt. Cook told NBC News. “We never recommend people get involved. That’s a personal decision that a citizen has to make.”

Use of force and firearms expert Emanuel Kapelsohn told NBC News that it appears the man who shot the suspect acted appropriately.

Kapelsohn added, “Who knows how many people would be dead if he had not acted?”

The man who shot Jones had a valid concealed-carry permit, according to Arlington police.