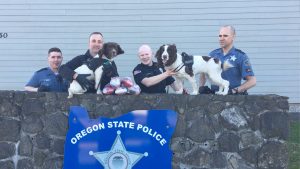 Coos County, Ore. – Police seized over 10 pounds of methamphetamine after a traffic stop on Highway 101 near North Bend.

Police said an OSP trooper pulled over a car near milepost 234 on Highway 101 on March 15.

A Coquille Tribal Police Officer and his drug detection dog “Ben” went to the scene to assist after the trooper noticed indications of drug trafficking.

Initially, officers did not find any controlled substances, but they did find evidence that there may be some hidden more thoroughly in the car. The vehicle was seized and taken to OSP’s Coos Bay Area Command.

The next day, officers said they executed a search warrant on the vehicle and subsequently found 10.8 pounds of methamphetamine hidden in a compartment.

According to detectives, it’s the largest single seizure of methamphetamine in Coos County history.

Charges against the driver of the car are being forwarded to the Coos County District Attorney’s Office.