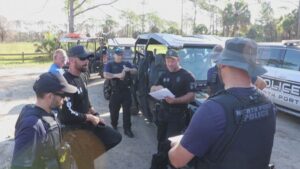 NORTH PORT, Fla. (NBC) – Police in Florida are still searching for Brian Laundrie in connection with the disappearance of his fiance Gabby Petito.

The large group of officials from several agencies were out Tuesday at the Carlton Reserve.

They are coordinating their efforts in the hunt for Laundrie.

He was last seen heading out for a hike in the 25,000-acre nature reserve which is near his family’s home in  North Port, Florida.

Laundrie is considered a “person of interest” in Gabby Petito’s disappearance.

The couple had been traveling across country in a camper van, documenting the trip on social media, when she went missing.

Laundrie refused to cooperate with police in their search for Petito.

His parents said they last saw him on September 14th when he left to go on a hike at the nature preserve.

Laundrie has not been charged with a crime or even named as a suspect in a crime at this point.