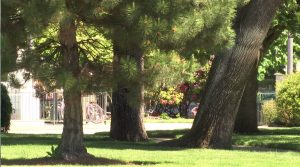 Medford Parks and Recreation declined to go on camera but said the porta potty was costing the city about $160 every week to be fixed.

The department said users were putting padlocks on the doors, the inside was getting ripped apart, and people were putting sleeping bags in the toilet.

Its removal is a big disappointment for some of the homeless population. Philip Cunningham said you can tell the porta potty is gone.

“Look around [at] the bushes, you can tell there is no porta potty here and it is really needed,” Cunningham said.

Cunningham acknowledged the vandalism but said a porta potty is still necessary for the park.

“We got some strung out druggies and sometimes that does happen but I do know there is a lot of people here that respect that,” Cunningham said.

Parks and Recreation said they would like to fix up the park in the future but at this time there is no definitive plans.