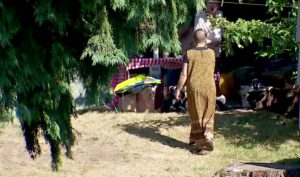 Portland, Ore. (KATU) — Flor Hillard is in her 70s, lives alone, and has a tough time with the upkeep at her home off Powell Boulevard in Portland. She said, “The people in the backyard, I let them stay there because they’re helping me cleaning around. You know mowing.”

The couple has been there since June living in a tent and the garbage is piling up. Hillard said, “Sometimes I’ve been telling them to clean up, you know? And they’re lazy and he get lazy and just lay down and sleep you know?”

The city doesn’t patrol for backyard campers their enforcement is based strictly on complaints. Neighbors haven’t complained to the city about it yet. That doesn’t mean they haven’t taken issue with it.

Neighbord Lisa Kiraly said, “They just argue and yell and I could kind of see when I got look back there that there’s lots of beer cans and garbage and stuff like that.” Another neighbor commented, “Just the whole aesthetics of having homeless people camping outside. It’s just not good.”

Hillard says she’s going to talk to the couple and isn’t sure how much longer she’ll let them camp in her backyard.

For some folks in the neighborhood they say this solution is a lot better than the alternative they’ve seen through the years. “It seems like that is so much more peaceful than just having whoever hangout on your street,” said neighbor Debbie Poole.