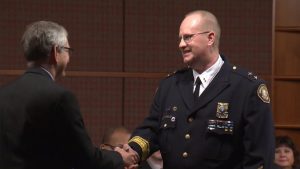 Portland, Ore. (KGW) — Portland, Oregon’s police chief is on administrative leave after allegedly misleading investigators in the wake of an accidental shooting.

“We need our Police Bureau operating at its best, and our officers can’t do that when there’s turmoil and confusion surrounding their leader,” Mayor Charlie Hales said in a media release. “Chief O’Dea has been providing excellent service as our police chief, and now needs to focus on these investigations. He and I agree that going on administrative leave during these open investigations is in the best interest of the Bureau and the city.”

The chief will remain on paid leave until internal and external investigations are completed. Assistant Chief Donna Henderson will take over as acting chief.