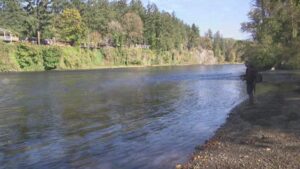 PORTLAND, Ore. (NBC/Gary Strieker) – Even in the Pacific Northwest, Oregon has more than its fair share of rivers and streams. But Oregonians are not taking their water resources for granted with many of them supporting a new measure to give their rivers special protections under federal law.

In Oregon, people are proud of their rivers. Bend Mayor Pro Tem Gena Goodman-Campbell explained, “From the old-growth forests to the high desert, Oregon is a state that is really defined by our rivers.”

Liz Hamilton works with the Northwest Sportfishing Industry Association. She said, “Clean water, outdoor recreation, the ability to fish and to hunt, rivers are everything in Oregon.”

There are more than 110,000 miles of rivers and streams in the state, and many face growing threats.

Fishing guide Bob Rees said, “Oregon has grown so much in population that we’re putting additional stresses on our important critical waterways construction near the watershed, adding additional pollutants into our clean rivers.”

In response, Oregon’s Senator Ron Wyden invited the people of Oregon to nominate their favorite rivers for special protections, receiving a flood of nominations.

Wyden is now sponsoring a bill with fellow Senator Jeff Merkley to add thousands of miles of the state’s rivers and streams to the national wild and scenic rivers designation list, giving them federal protection to preserve their special natural, cultural and recreational values.

Hamilton said, “Senator Wyden’s proposal, his challenge, is to protect more rivers in the state of Oregon than in any other state in the U.S.”

Rees said, “The more wild and scenic rivers we have, the more wild fish will thrive in our state and the more economic and social benefit that all Oregonians will receive.”

Benefits from waterways are both big and small.

Drinking water for a few hundred residents in these mountains.

Steve Graeper with the Rhododendron Water Association said, “[I] nominated Henry Creek for a Wild and Scenic designation because we want to protect our source water for many generations to come.”

It’s a far-sighted goal supported by Oregonians across the state.

Gary Strieker is an independent contributor to NBC News.