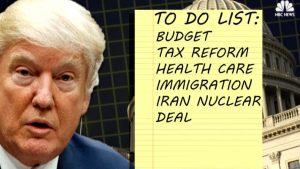 The two have publicly feuded in recent weeks, but now, as they’re trying to advance the GOP agenda, they say they’re closer than ever.

“My relationship with this gentleman is outstanding – has been outstanding,” said Mr. Trump.

This comes as a far cry from the President’s message from just weeks ago when the president said “I’m very disappointed in Mitch. Honestly, repeal and replace of Obamacare should have taken place.”

With just 39 days left on the official calendar this year, Republicans are trying to tackle a growing list of priorities, including passing a tax reform and a spending budget. They are also trying to find fixes for health care, immigration, and the Iran Nuclear Deal.