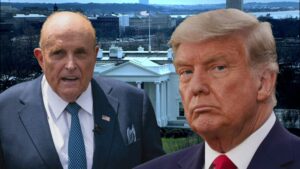 WASHINGTON, D.C. – President Donald Trump continues to push for recounts in several key swing states, but he hasn’t seen any big wins for his campaign so far.

In a long-shot legal battle that extends across six swing states Thursday morning, the campaign and Republican allies have filed at least 30 court challenges. NBC News is tracking all of them, finding 19 of those cases have been denied, dismissed, settled, or withdrawn.

In at least three cases, it’s because judges found the president’s allies failed to provide facts or evidence to back up their claims.

Trump’s legal advisor Jenna Ellis said on Fox News, “President Trump is absolutely right to fight for election integrity. And let’s be clear, this is not about politics. This is not about campaigning. This is about the law.”

The president’s campaign has the right to file challenges under the law, like pursuing litigation and asking for recounts. But his attorneys are alleging a nationwide conspiracy that doesn’t exist.

Rudy Giuliani, leading the president’s team and its push in Pennsylvania, is arguing for tossing out hundreds of thousands of ballots and, ultimately, stop the commonwealth from certifying its election results, he says, because of fraud.

Giuliani told a federal judge this week, “This is not an isolated case. It’s a case that’s been repeated in at least ten other jurisdictions.”

Opponents point out there’s no evidence of intentional misconduct and even Pennsylvania Republican Senator Pat Toomey sounds skeptical. “Let me just say, I don’t think they have a strong case,” he said.

The president still plans to fight, for now, probably well into December even as his allies nudge him to acknowledge and accept his loss in the presidential race, according to multiple sources familiar with the discussions.

One senior administration official told NBC News those close to the president know the legal challenges are continuing but understand they’re “futile.”

Senator Mark Warner (D-VA) said, “I view that the vast majority of Republicans are embarrassed by what Donald Trump is doing.”

There’s a pie-in-the-sky scenario that a small number of people linked to the campaign’s legal team seem hopeful about: that these legal challenges could raise enough questions to delay vote certifications, which would then allow state legislatures to get involved. Many of those chambers are Republican-led. And if that happens, there’s an extremely unlikely scenario in which Congress

would get involved. But most experts agree at this point that is simply a political fantasy for team Trump.