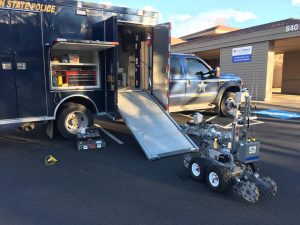 Update (02/07/17 4:35 p.m.) — Medford Police said the suspicious item that was found outside Providence Health and Services has been determined to be a fake bomb. Police initially believed the bomb was real, but once the Oregon State Bomb Squad arrived, they determined it was a fake.

Medford, Ore.- A Providence Medical Group clinic and some Providence offices were evacuated Tuesday afternoon after a suspicious package was found outside the PMG-Medford Pediatrics office on Royal Avenue.

Oregon State Police’s bomb squad was called to the scene after a package wrapped in black tape was found outside the building. The evacuation happened about 3 p.m.