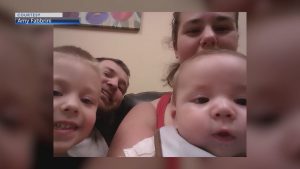 Redmond, Ore. (KTVZ/CNN Newsource) – When it comes to being a good parent, should a low IQ factor in?

Redmond mom Amy Fabbrini said, “They’re thinking that because we have this disability, that we can’t safely parent our child.”

Fabbrini and Eric Ziegler said they lost custody of their two sons because of their mental limitations.

According to court documents, limited cognitive abilities interfere with their abilities to safely parent a child.

Four years ago, the Department of Human Services took their first son, Christopher, days after he was born.

“The friend we had living with us made a report saying that supposedly Eric was neglecting Christopher, for like, not picking up on his ques,” Fabbrini said.

Sherrene Hagenbach, a former CPS volunteer who oversaw visits, is now fighting on the couple’s behalf.

“I never saw anything that was alarming to me at any point”, Hagenbach said.

In February, history repeated itself with their second son, Hunter.

The DHS cannot comment on specific cases, but said that IQ alone cannot be the only factor in removing children.

But despite fulfilling requests to take parenting, CPR, nutrition classes and more, they have not been able to regain custody.

It could be a long road, but the couple has two good reasons not to give up.