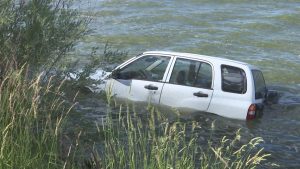 The crash happened at about 5 in the afternoon on Highway 140 about 10 miles west of Klamath Falls at Milepost 58.

Oregon State Police say the driver lost control of the SUV for unknown reasons, and the car went into the lake.

The California driver and his passenger from North Dakota were able to make it to shore safely.